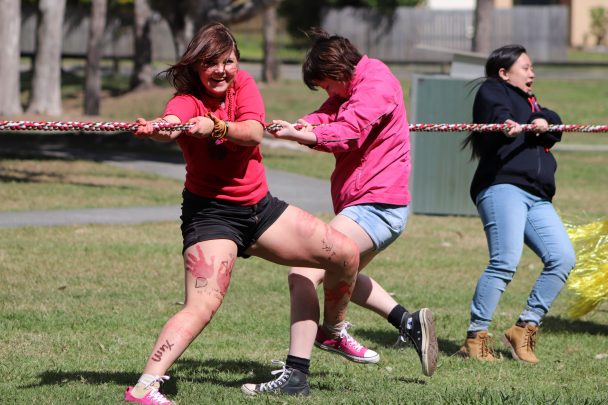 Last Friday we hosted our annual Athletics Carnival with a bit of a twist!

Of course, since Covid-19 has managed to disrupt just about everything this year, it made no exceptions for our Athletics Carnival! Our lovely HPE Teacher, Chelsea, is stuck across the border in NSW and has been unable to come into school. We didn’t let this break our stride, our awesome teachers Kellie and Bridget volunteered their time to organise and host the Athletics Carnival this year instead.

On the morning of the carnival the girls began arriving at school dressed in their house colours, excited to see their friends and debate over which team would win. The girls had colourful wigs, tu-tu’s and novelty shirts among other things; and when the red, blue and yellow paint came out, most of our girls ended up covering themselves in the coloured paint of their house team.

We loaded onto the buses and away we went. Since we couldn’t host the carnival at the regular oval we go too (thanks again, Covid), we opted to go to Les Atkinson Park near school and spend the day down there completing our athletic events and activities.

Once we got to the park we all bunched up into our house teams and began practising our war cries. Once everything was ready to go, each team, Goolagong, Freeman and Nova, had a turn at shouting their war cries as loud as they could – hats off to Nova (blue) for being the loudest and proudest!

Our first event for the day was the potato sack races! This is always a really good time for both the people participating and the people spectating. The girls cheered one another on as they hopped and jumped their way across the grassy field.

Our second event for the day was the shoe throw. Inspired by the actual track & field event titled “shot put”, the girls took a shoe each and competed to see who could throw their shoe the furthest. Girls were using all kinds of techniques, over/under arm throws, using the laces to sling the shoe, holding the shoe by the toe-end etc. This was a lot of fun and something both the students and staff had a really good time participating in.

After this we had a short morning tea break. The sun was shining well and truly by this point, so we all sat on the grass, soaking up the sun and eating some juicy fruit!

After morning tea it was time to get stuck back into the carnival. Our third event for the day was much like the shoe throw, however with a frisbee instead. The girls lined up and took turns at throwing frisbees to see who had the best frisbee technique and could get it gliding the furthest away.

After playing with the frisbees we moved onto the infamous “Teachers VS Students Tug-of-War” which is always a hit at the Athletics Carnivals. The students piled onto one side of the road and discussed how they would position themselves along the rope to ensure they had the best chances of winning. The staff tried their best to organise themselves as well as the students had, but alas, they did not, and the students reigned victorious this year!

We then had another break for lunch. Our wonderful Neil spent the morning up at the school cooking sausages and meat patties, and then brought all of the food down to the park so we could have a BBQ despite all the public BBQ’s being switched off (again, thanks Covid!). The girls either sat out in the sun and relaxed or took the time to play with the park gym equipment.

We then moved onto our final event for the day, the egg and spoon race! This isn’t your average egg and spoon race though as we replaced eggs with golf balls to make for a substantially less messy activity. We had big wooden spoons for the girls to balance their golf balls on, and of course, many of the staff got involved as well. The girls were doing their best to balance the golf balls while speed walking from one side of the grass to the other side where their team mate was waiting. We had so much fun with this that once we finished the egg and spoon race, we continued to make up our own relay events and carry them out, such as “balance the golf balls on the spoons while also balancing a book on your head” or, “star jump from one side of the field to the other”.

We all had an absolute ball, and although it wasn’t our usual way of running the Athletics Carnival, we still had a beautiful day out in the sun while keeping active!

Overall, the house champion of the Athletics Carnival is NOVA (blue)! Well done girls, that’s 100 points towards the house cup!! In second place we had Goolagong (red) and last, but not least, we had Freeman (yellow) take out third place.

Well done girls and thank you to absolutely everyone who made this day such a success!