Home > Latest News > Students have a heart for charity

Students have a heart for charity 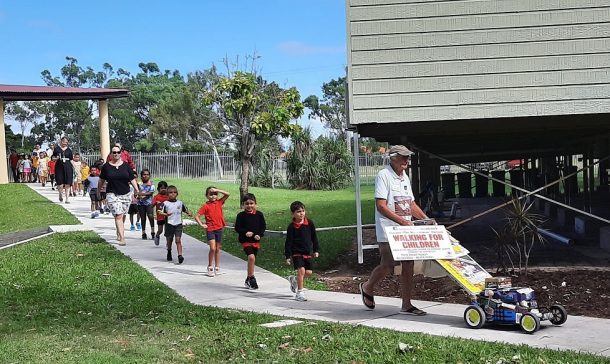 He visited Shalom Christian College on April 28 to speak to students about Bravehearts and what has inspired him to raise money by pushing his lawnmower around Australia for the past 15 years.

Claude answered questions from the children before student leaders Aromah and Khylah donated around $250 to Bravehearts on behalf of the school.

Students also happily did a lap of the school campus with Claude as he pushed his trademark lawnmower.

“I was so touched and I will remember this morning for ever,” Claude later said.

Claude’s visit to Shalom Christian College was one of his last stops on a 38-day fundraising trek from the Sunshine Coast to Townsville.

In 2019 he was awarded an Order of Australia medal (OAM) in the Queen’s Birthday honours in recognition of his fundraising efforts.