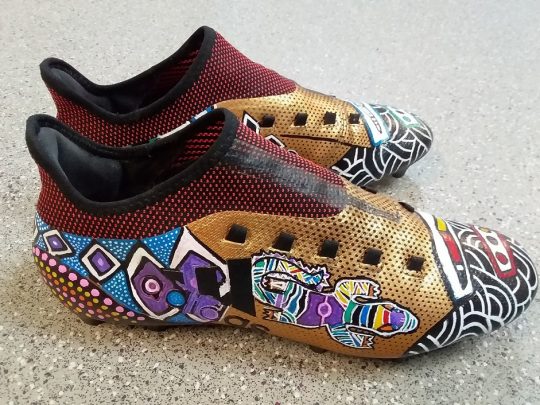 When Shaun and his Townsville Blackhawks team ran onto the field to play Burleigh Bears in their Intrust Super Cup match on the Gold Coast on Saturday, Shaun wore very special boots.

They were decorated with an Indigenous design created by Shalom secondary students, who Shaun supports in his role as a Youth Worker.

The boots acknowledge the important contribution Indigenous players make to the game of rugby league.

Shaun has played rugby league around Australia and in Europe, lining up for teams in Tully, Cairns, Brisbane, Townsville, Sydney, Wollongong and Limoux, in France.

He won state league titles in Queensland (with Northern Pride) and New South Wales (with Illawarra Cutters), was signed to Melbourne Storm and played for St George-Illawarra Dragons at the NRL Auckland Nines tournament.