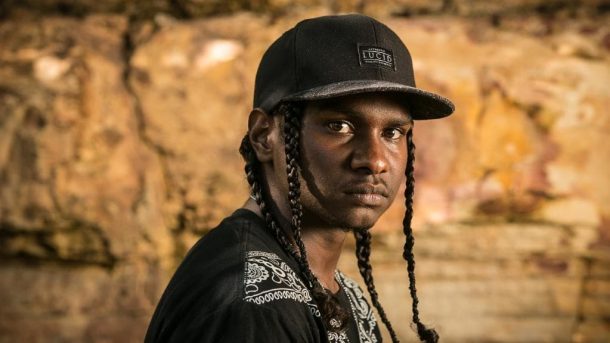 From remote Northern Territory communities, to Townsville and to music stages across the country, Danzel Baker is making a big impact in Australia’s entertainment scene.

The former Carinity Shalom Christian College student is also inspiring young Indigenous people, resulting in him being named the Northern Territory Young Australian of the Year.

Danzel was recognised for using his talent as a hip-hop musician and dancer to inspire Indigenous youth to embrace their culture and take up leadership positions.

Going by his stage name Baker Boy, Danzel’s hit single “Marryuna” was voted into number 17 in Triple J radio’s Hottest 100 for 2017 and he has won a National Indigenous Music Award.

Baker Boy has toured Australia extensively, supporting the likes of 50 Cent and Dizzee Rascal and performed at the Splendour in the Grass, Laneway, Golden Plains and WOMADelaide festivals.

Carinity Shalom Christian College Head of School Sharyn Ive says Danzel, who undertook all his high school study at the Townsville school after growing up in Arnhem Land , was “a talented young man and shared his gift with everyone.”

“Music and dance were integral to Danzel’s life as a teenager studying at Carinity Shalom Christian College. He was one of the leaders of an Indigenous dance group at the school when it did public performances,” Sharyn says.

“Danzel had extremely good leadership skills, was culturally strong and a leader in his community. He was a natural performer who knew that he wanted to do that professionally and he had ambition.”

“It’s wonderful that Danzel’s Indigenous heritage and culture is reflected in his creative output as a musician and dancer. He is an innovative artist whose music is helping to unite Indigenous and non-Indigenous people,” Sharyn says.

“Our school community, particularly those people who have taught him and helped him along the way, are extremely proud of Danzel’s achievements in his creative endeavours and as a role model for young Indigenous people.

“Danzel always made sure that his younger family members and students were always doing the right thing. He was a really good leader and was always promoting Indigenous youth and helping them to make good choices.”

“He is an inspiration not only for past and current students at Carinity Shalom Christian College but also young Indigenous people nationwide.”

Danzel is a national finalist for the Young Australian of the Year award, to be announced in Canberra on January 25.