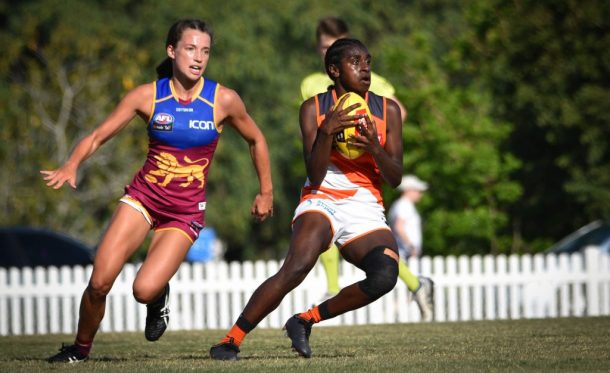 She was once a reluctant Australian Rules football player but now Carinity Shalom Christian College graduate Delma Gisu is creating history in the sport.

The 22-year-old has reached the pinnacle of women’s AFL after being drafted to play for the Greater Western Sydney Giants in the AFLW competition.

She will become the first woman from the Torres Strait Islands – and who grew up there – to play in the AFLW.

Hailing from Mer Island in the Torres Strait, with a population of less than 500 people, Delma reluctantly started playing Australian Rules football five years ago while a student at Carinity Shalom Christian College in Townsville.

“I wasn’t interested in AFL, no way near interested. It wasn’t for me. I just wanted to stay with basketball,” Delma says.

“I played football in the school competition after one of the PE teachers asked me to play. I said, ‘Okay, I’ll just play one game and that’s it’… and all of a sudden I’m here in Sydney.

“I taught myself to play AFL, pretty much. I picked up the rules by just watching. I’m so blessed that I found AFL and look where I am now.”

“Shalom was really great. The teachers were always there for me, they encourage you and give you a pathway to follow,” Delma says.

“Before I went to Shalom, I didn’t know what I wanted to do when I finished school. Shalom gave me that pathway to play AFLW.”

Carinity Shalom Christian College staff also helped Delma move to Brisbane to play for Wilston Grange, where she won the QWAFL state league premiership last year before being drafted to play in Sydney.

“Delma was so passionate about her sport and she was driven. That was her goal and she achieved it, which is fantastic,” Carinity Shalom Christian College Head of School Sharyn Ive says.

“As a sign of her dedication if she had to catch three buses to get to training, she would, and not many young people would do that. We knew she took her sport seriously and we made sure that she had opportunity and we connected her with traineeships.

“At Shalom it’s not just about students achieving academic goals – it’s about them achieving all their goals.”