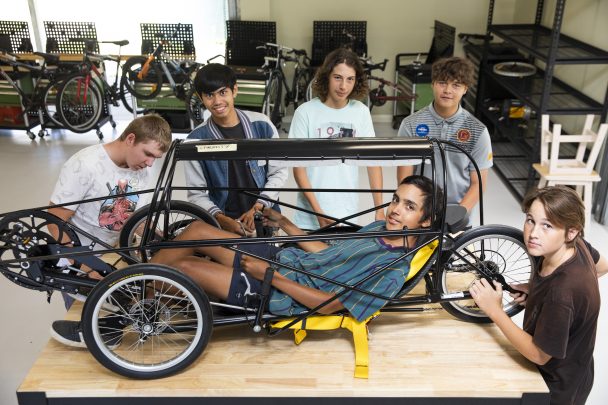 It’s a motto students from two Carinity Education schools may have in mind when they strive for their best on the racetrack next year.

But rather than horsepower, they’ll be travelling around circuits with human power.

Students from Carinity Education schools in Hervey Bay and Rockhampton are getting ready to hit the road as part of the Human Powered Vehicle (HPV) circuit.

The program culminated in Team Velocity completing the Fraser Coast Technology Challenge – the biggest HPV event for schools in Queensland which sees students pedal vehicles around the streets of Maryborough for 24 hours – in a borrowed vehicle.

“At the beginning of 2018 a local volunteer who owns a HPV approached Glendyne about being involved. Over time, we realised the students were interested and enjoyed the activity,” Carinity Education Glendyne Principal Dale Hansen says.

Dale says participation in the HPV program “motivated students to improve their attendance and behaviour.”

“Being a part of HPV in most schools is for those who are ‘achievers’ and ‘committed’ athletes in school sport. It has some prestige attached being part of the HPV team,” Dale says.

“Staff, parents and students see this as a positive activity, and have been willing to engage and support. Some parents attended to watch the races and cheer on the students.”

“They developed teamwork, an interest in health and fitness and comradery amongst themselves in supporting one-another,” Mark says.

“They were accepted as colleagues by other school students in the HPV community and they can hold their head high given over 100 cars competed.”

Philosophies of the HPV program align with Carinity Education’s motto “Believe, Belong, Become” and enables teachers to “map curriculum and learning into something the students enjoy”.

“There is a range of embedded learning through assembly, maintenance, training and competing in HPV. This includes teamwork, communication, literacy, planning, health and physical education, mechanical and engineering skills, and goal setting,” Dale says.

Carinity Education Rockhampton Principal Lyn Harland says her students, many of whom have an aptitude for vocational training, were looking forward to prepping a single-seat vehicle for optimum on-track performance.

“Our cohort loves the hands-on work and this is a way to help them achieve a sense of completing and competing together. It’s something they could continually work on and tinker away at,” Lyn says.

“There are many science and mathematical components involved in the curriculum for our students to consider also.”

The two Carinity Education teams will contest the Queensland HPV Super Series, which this year featured eight races on circuits between Mackay and Ipswich, including the famous Willowbank Raceway drag racing track.

For Carinity Education Rockhampton students the races will be the first time they have competed against other schools in a sporting event.

“By participating in events including other schools we hope our students can obtain a wider sense of community, learn how to work as a team and have fun doing it,” Lyn says.

“Giving students the belief that they can achieve in a team environment, and a feeling that they belong in a collective of like-minded young people working towards a shared goal, gives them a sense of achievement, self-belief and empowerment.”