Glendyne student to make waves for Australia in Tahiti 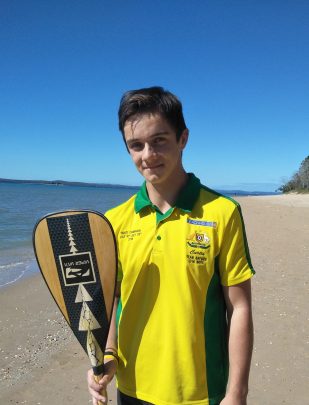 Once a “troubled kid”, Curtis Easton is turning his life around at Carinity Education Glendyne.

The teenager has developed self-discipline and a passion for hard work, which he successfully applies to both school work and his sporting career.

Curtis has “started to turn my life around” at the alternative education school in Hervey Bay, which assists students who have not found success in mainstream schools.

“I have continued to grow during my time at Glendyne, my grades have improved, I have developed a work ethic and advanced in my sporting outside of school,” Curtis says.

“I understand now that the teachers are not only here to help with our school work, but they also encourage us to move forward and push ourselves to the limit.  I have achieved all my set goals and continue setting more.”

Curtis is making a big splash in the world of outrigger canoeing. He will swap the classroom for the beach when he represents Australia at the 18th World Sprint Championships in Tahiti from July 16-26.

He took part in the Hervey Bay leg of the Commonwealth Games Queens’s Baton Relay in April, which he says gave him “the biggest smile and a good feeling of accomplishment”.

“Curtis is a dedicated young man, he is polite, well-mannered and strives to put his best foot forward,” Dale says.

“He is overcoming challenges and is developing into a positive and determined role model that other students can learn from.”

The Carinity Education Glendyne community is getting behind Curtis by helping his family’s fundraising for the overseas trip, hosting a special fundraiser in June which featured everything from pop-up shops and games, to a Tahitian hangi-style Hima’a lunch.