Home > Latest News > Graduate has a taste for hospitality

Graduate has a taste for hospitality 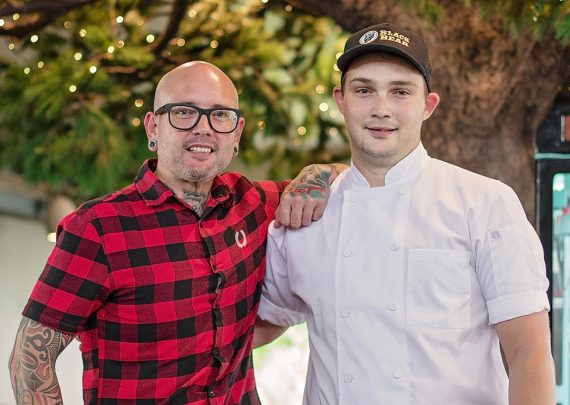 He believes he wouldn’t have developed the taste for his chosen profession if not for Carinity Education Glendyne.

Travis’s life was going off the rails when he enrolled at the school as a young teenager.

Coming from a broken family and a “quite disruptive” home life, Travis found solace and “a sense of purpose” in the school’s kitchen.

“Glendyne’s facilities were amazing. You got the chance to cook amazing things,” Travis recalls.

“I had a lot of mentoring at school and I chose the right path. I learned really quickly that life’s a lot better when you’re working towards your goals.

“Towards the end of school, they would ask you what you wanted to be, and I said, ‘I want to be a chef. I want to be a young Gordon Ramsay’.”

After graduating as the Dux of the school a decade ago, Travis completed his apprenticeship as a chef in Uluru, where he prepared meals for the Duke and Duchess of Cambridge.

After working in restaurants in every state and territory of Australia except Tasmania, Travis has returned to Hervey Bay to work as sous chef at Black Bear, a popular restaurant owned by My Kitchen Rules winners Dan and Steph Mulheron.

“When you’re in a kitchen, and even when we were students at school, it feels like a small family working together as a team,” Travis says.

“It’s that camaraderie that I missed from my childhood that I love. It makes you feel like you’re wanted.”