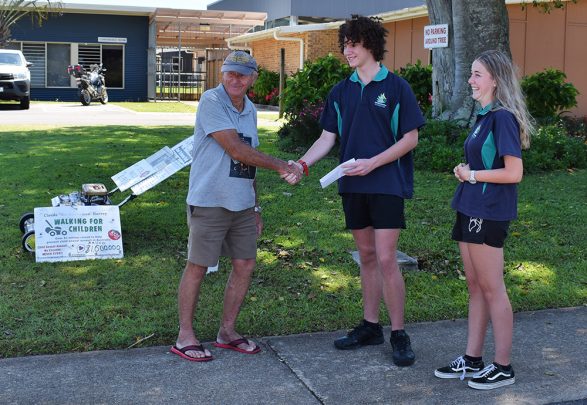 Carinity Education Glendyne is supporting Claude “The Mower Man” Harvey and his fundraising efforts for Bravehearts.

Claude has raised $1.6 million for the Australian child protection organisation by pushing his lawnmower around the country.

On October 30 he visited Carinity Education Glendyne, the latest stop on a 30-day trek from Sunshine Coast to Wide Bay.

Year 11 Vice Captains, Jett and Imogen, presented a donation to Claude and were interviewed by the local TV news on the day.

Deputy Principal Brian Hawthorne says there is a kinship between Carinity Education Glendyne and Bravehearts, given both organisations have been supporting at-risk youth since the late-1990s.

“Our school community is happy and proud to support Claude and Bravehearts as that organisation, like Carinity, strives to give at-risk youth a better future,” Brian says.

A former lawnmower salesman from the Gold Coast, Claude travels around Australia five months a year to raise money for Bravehearts donation bucket.

The 75-year-old’s dedication was recognised last year when he awarded an Order of Australia medal (OAM) in the Queen’s Birthday honours list. He hopes to raise $2 million for Bravehearts by 2022.