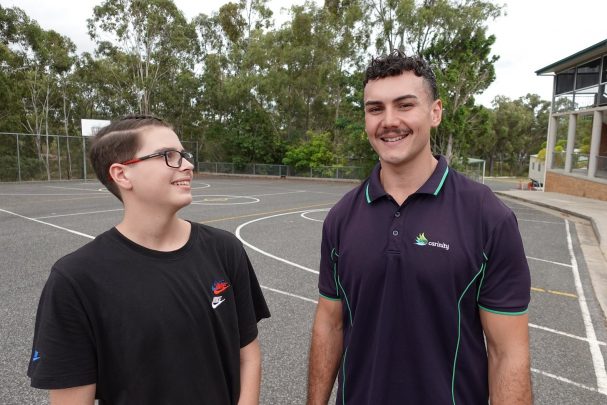 There’s a sense of magic when you enter a Carinity Education school. It’s hard to put your finger on. You can see it just by watching the staff and students interacting.

Travel to any of its five schools across Queensland – in Townsville, Rockhampton, Gladstone, Hervey Bay and Brisbane – and you will feel uplifted by the tremendous impact of Carinity Education upon young people’s lives.

Part of the Carinity Education magic is created through the integration of youth workers into the classroom to support students and the specialist teachers.

Integrating youth workers in the classroom has been a Carinity Education approach since its first school, Southside in Brisbane, opened 25 years ago. Fulfilling a vital role by contributing to the success of students’ academic and personal achievements, school youth workers wear many hats.

This ranges from driving the school’s dedicated buses, running youth programs and coaching sports teams, to encouraging students back to school when they have disengaged from their learning or had a period of absence.

Josh Noovao, a youth worker at Carinity Education Gladstone, plays a vital role in the personal development of each student. He describes his role as, “Supporting young people in their education and wellbeing – and finding that good balance between the two”.

“A child cannot be educated if their overall social, emotional and wellbeing is not first addressed and supported,” Josh explains.

Known as ‘Cooki’ by adoring students, Josh attributes positive relationships as the key to helping students’ academic success in the classroom.

“Once a relationship has been formed you can encourage them to engage in activities at school, whether that be their classes, youth programs, or extracurricular activities. There is no set-in-stone unique way to engage a student; all it takes is building a relationship and connection with a person. Humans need connection and these young people crave it more than ever,” Josh says.

“It’s extremely rewarding to be able to invest in and support a young person who everyone had given up on, give them a chance and encourage them to have the belief that they can win, they can succeed, and they can make something of themselves.”

In addition to classroom support, Josh runs wellbeing programs for students culminating in an end-of-year camp for male students designed to “get them out of their comfort zone and expand on the potential every one of them has.”

“To see the growth within the boys, week in and week out, and finally seeing them perform at camp and doing activities such as high ropes courses, hikes, team building and survival skill activities, made me very satisfied,” Josh recalls.

“It created such a positive experience for these boys. The fun we had was a massive career highlight for me and I know it would have been a memorable time in the lives of these young men.”

Students Ford and Connor attended the end-of-year camp at Mount Tamborine in 2021. Ford believes the camp has helped him “become a better version of himself” through learning leadership skills he now utilises to be a positive influence on younger students and a role model to those around him.

“The camp helped me to grow as a person and strengthened the friendships I have, as well as to create new friendships. Camps like this keep me motivated to try harder,” Ford says.

The experience also had a profound positive effect on Connor, who at times had thought he may not finish high school. Since attending boys’ camp and seeing his older brother graduate from Carinity Education Gladstone last year, Connor is more determined than ever to finish school and accomplish his goals.

“My experience at camp made me realise I am far more capable of things than I was aware of, and that I can trust and rely on so many people from our school community. I feel like anything is possible now, with hard work and the support of my Carinity family.”