Celebrating our Class of 2021 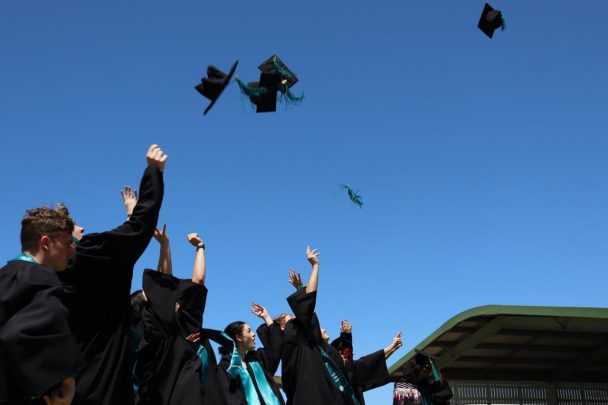 On Friday 19th of November we celebrated the graduates of 2021 – only the second Year 12 cohort since the school’s inception.

The stage was set by Toko Ton Traditional Japanese drummers and Uncle Alfonso Canendo on the Yidaki – Didgeridoo. Their joint performance was not only beautiful and emotive but captured the essence of the school’s uniquely diverse and deeply inspiring foundation.

The Welcome to Country was performed by Uncle Richard Johnson of Gehgre Aboriginal Corporation and was followed by the celebrations of achievement in education, contribution to school community and personal growth.

Principal, Jane Greenland spoke of the privilege of having worked with the graduating class and seeing them make progress in all areas of their lives having met the challenges of graduating from Year 12 remarkably, with persistence, perseverance, and promise. Jane finished with a passage from Proverbs 16:24, “Pleasant words are like a honeycomb, Sweetness to the soul and health to the bones”.

Youth Worker Josh ‘Cooki’ Noovao and Lead Youth Worker Cassie Benjamin captivated the crowd in their roles as MC, with their heartfelt words and recollections of the time the graduating class spent with Carinity.

These sentiments were echoed by all members of staff, including teachers and Youth Workers who delivered graduating members of their Pastoral Care Classes inspiring, hilarious and at times emotional words of wisdom.

Graduate Blake Randle’s received awards for Highest Achievement in VET and Aquatics, as well as being the recipient of the school’s Carinity Education Community Award.

Student Ebonhi Gibson took out Highest Achievement in Essential English as well as the Arts award.

There was a strong feeling amongst those in attendance that, having witnessed the growth of 2021 graduates in all areas of their lives and the bond shared between each member of staff and students, Carinity Education Gladstone should be recognised as a school of second-chances for those with unlimited potential and countless possibilities to prove it.